When the current Ann Arbor Huron seniors were freshman, a matchup between Huron and Dexter would not have been a showdown with two of the state’s better programs.

Fast forward to Friday night, and the stakes were large for Huron’s seniors’ final regular-season game at Riverbank Stadium. The game did not disappoint – Huron came up with a game-clinching fourth down stand in the final minute to hold off Dexter, 28-21.

Huron head coach Antaiwn Mack hoped with victories like this, people in Michigan will begin to take Huron football seriously.

“I think this win solidifies that we are a for-real football team. We’re trying to build something here that’s serious, and I’m glad to see the community come out and support us,” Mack said. “I love this atmosphere and big-time games like this. Our kids rose to the occasion (Friday).”

One Huron senior in particular that rose to the occasion was running back C.J. Baldwin, who scored two touchdowns for the Rats. When it was the Baldwin family’s turn to walk their son onto the field before the game, he was escorted by only his father, as his mother was recovering from a “medical procedure.”

Baldwin said he was inspired to have a big game in her honor.

“I can’t wait to get home and be like, ‘Momma, we did it,’” Baldwin said. “I called her before the game and said ‘I’m going to have a field day today.’ Dexter had a great defense, but it was personal and I had to do what I had to do today.”

Huron’s defense rose to the occasion as well, holding a Dexter team averaging over 46 points per game well below its average, despite the Dreadnaughts amassing 367 yards of total offense.

On its opening drive of the game, Dexter drove the ball in Huron’s red zone, but Bruce Williams and De’Jon Mclilley combined to thwart Dexter’s outstanding running back Cole Cabana in the backfield. 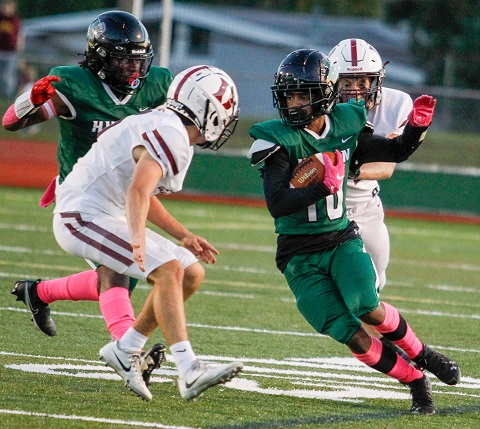 Williams was a force all night long for the Rats, wreaking havoc on both Dexter’s ground and air game.

“Bruce Williams is a leader, on and off the field,” Mack said. “He’s a hard-nosed football player, reminding me of a Big Ten defensive player from Iowa, Wisconsin, or Michigan. He has a serious motor and the kid works on his craft seven days a week.”

Huron’s defense had its back against the wall on Dexter’s second drive, which saw the Dreads take advantage of great field position and march the ball inside the Rats’ 10-yard line. Once again, Huron’s defense came up with a big play as junior Torrence Greene intercepted Dexter quarterback Cal Bavineau, his first of two for the game. 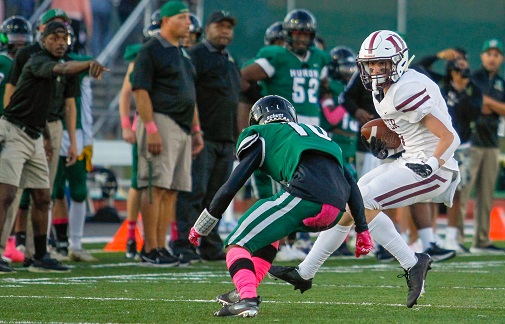 Huron’s offense got the ball back after a Williams third-down hurry forced an incomplete pass, and this time only took four plays to find the end zone. A 35-yard sliding catch along the sideline by Jamari Thomas set the Rats up in Dexter territory, and Baldwin scored on a 1-yard run three plays later. Huron led 14-0 with 7:25 remaining in the first half.

Just when it looked like Huron had all the momentum heading into halftime, Dexter flipped the script, blocking a punt in the half’s final minute. Two plays later, Dexter used a trick play to find the end zone: Bavineau tossed the ball backwards to Cabana along the sideline, who threw the ball across the field to a wide-open Bavineau for a 21-yard touchdown with 25 seconds remaining in the half.

Huron stretched its lead with a 12 play, 65-yard drive that burned more than half of the third quarter. Thomas had three catches totaling 29 yards on the drive that saw Baldwin score his second touchdown of the game from a yard out. Huron led 21-7 with 5:14 remaining in the third quarter.

After Dexter responded late in the third quarter with a 26-yard touchdown on a slant from Bavineau to receiver Braeden Fuson, Huron’s offense struck again. Dexter’s defense had its chance to get off the field, but Baldwin converted a key fourth-and-1 near midfield. Five plays later, Pinnace scored his second touchdown on the night on a 22-yard QB keeper.

Huron kicker Adam Samaha made his fourth extra point, and Huron led 28-14 with 7:09 remaining in the fourth quarter.

Huron’s two-score lead did not last long. Two plays later, Bavineau found Fuson wide open, who broke one tackle and scored a 76-yard touchdown to pull the Dreads back to within one score just 38 seconds later.

Two Huron turnovers on downs gave Dexter’s offense two chances in the final 5 minutes to tie the game, but Huron’s defense forced incomplete passes on fourth down on both drives.