The Dexter offense not only has defenses on the defensive, but this high-powered, fully-automated machine seems to have found cruise control as the Dreadnaughts put up another huge number, and more importantly, tossed another game into the win column.

Dexter (4-1 overall) scored 34 points in the first quarter and never let their foot off the gas until the second half in a dominating in every way 69-13 win over visiting Pioneer Friday night in an SEC Red Division game before a packed (and loud) house at Al Ritt Stadium.

This is the first year the Dreadnaughts are playing in the more competitive Red Division and so far they have crushed it. Dexter is 2-1 against their new division rivals and have scored 147 points in the three games.

And since their overtime heartbreaking 37-36 loss to Bedford, the Dreadnaughts have knocked off Lincoln (44-34) and now Pioneer.

Another test awaits on Friday when the Dreadnaughts face 4-1 Huron. The River Rats defeated Bedford by one point, 31-30, earlier in the season and knocked off Monroe 38-14 on Friday.

According to Michigan-football.com, which tracks high school football scores back to 1966, Dexter’s 69 points were the most ever scored on a Pioneer team. And the Pioneers came into the game allowing 29 points per game this year – a lot, but certainly not 69.

The Dreads have scored over 36 points in their five games and over 40 in their four wins. The 69 points is not a record for Dexter’s recent offensive accomplishments. They put up 70 points last year in a win over Jackson. They also scored 64 the previous year in a win over Dearborn Edsel Ford.

Cal Bavineau continued his outstanding season against the Pioneers. The senior quarterback completed 9-of-11 passes for 241 yards and tossed five touchdowns in the victory.

Bavineau certainly doesn’t play favorites as he tossed the ball all over the field to multiple receivers all night long. Whether they were quick throws from the pocket or throwing on the run, he found the open man.

The Dreadnaughts scored on their first possession of the game – the second play from scrimmage – when Bavineau threw a 32-yard TD pass to Fusion. A few minutes later the senior QB tossed a 7-yard TD pass to Parachek to make it 14-0.

The Pioneers turned a big play into seven points when Samson Dabney ran around the left side and raced 69 yards down the sideline to make it 14-7 with 6:40 left in the first quarter. 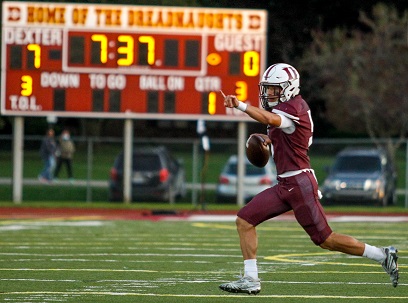 Cabana scored his first TD of the game on a 32-yard run to cap a five-play, 65-yard yard drive. The Dreadnaughts messed up the extra-point attempt but pushed the lead to 20-7.

Pioneer fumbled the kickoff and Dexter’s Thomas Rayer recovered at the Pioneer 43-yard line. Two plays later, Cabana ran 46 yards to make it 27-7 with still 4:15 left in the opening quarter.

Dexter’s Micah Davis intercepted a Grant Nelson pass on the next series to give the ball right back to the offense. And they again turned the turnover into points.
Cabana only need two yards to make it 34-7 with 2:39 left in the opening quarter.

In the second quarter, Bavineau tossed a 39-yard TD pass to Rychener to push the Dexter lead to 41-7 with 10:37 until halftime.

The Dreadnaughts would add another score before halftime to make it 55-7. 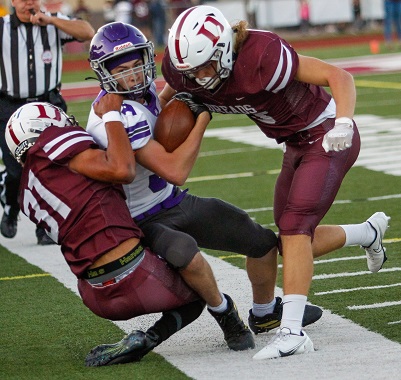