After soundly defeating Skyline and Pioneer by a combined score of 111-19, the Dexter football team discovered Friday night that Ann Arbor teams are not created equal.

The Dreadnaughts rolled over Skyline 42-6 and Pioneer 69-13 in their first season playing in the SEC Red Division. They knew it wasn’t going to be easy at Huron, against a team that was 4-1 and had its chances to knock off Saline in week two.

It turned out that nothing was easy for either team in a game that wasn’t decided until the final seconds clicked off the clock before a packed, loud and enthusiastic crowd at Riverbank Stadium.

It was a different kind of game for the Dreadnaughts, who have blown out four teams and lost by a point in overtime to Bedford. That was obvious early on when they decided to go for it on fourth down on their first drive – they didn’t get it. On their second possession, they had a turnover. 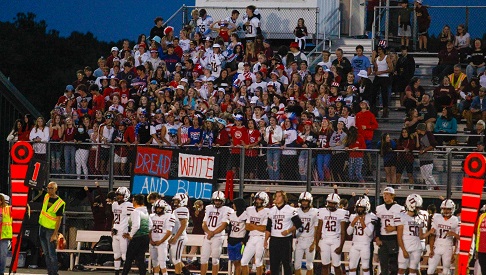 The River Rats came in with a similar track record of running it up on opponents. In their four wins coming into the game, they had outscored their opponents 144-44 with two shutouts.

One common opponent for the two teams was Bedford. The River Rats defeated the Kicking Mules by a point (31-30) while Dexter lost by a point (37-36). So a close game was in the forecast, on the table and in the air when they took the field on a perfect night for football before that raucous crowd.

And finding these two programs playing in a game of this magnitude and at this high level is a testament to two coaching staffs that have come in and rewrote the history books. Dexter coach Phil Jacobs and Huron coach Antaiwn Mack have not only won at the varsity level but are building something for now and the future. This is a foundation – not an end result.

In 2017, the Dexter football team didn’t win a football game and had never qualified for the postseason. Since then, they haven’t missed the playoffs and have gone a combined 22-8 in the regular season. 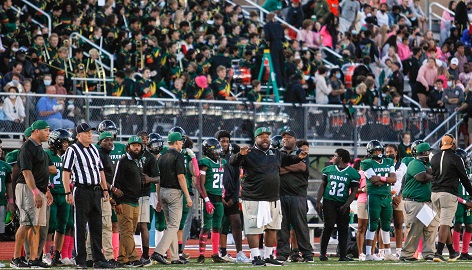 Huron went winless in four consecutive seasons from 2015 to 2018 and won just one game in 2019. Last season, the River Rats went 2-2 before winning a playoff game with Kalamazoo Central. They lost to perennial state power Saline by just seven points in a second-round playoff matchup.

To say these two programs have come a long way would be a huge understatement. And to suggest that both programs are now among the best in the area – if not the state – would also be understating the obvious.

The game Friday night was competitive from the opening kick to the final whistle. And even though Huron led the entire way, Dexter was on the doorstep the entire way – they just couldn’t get it into the end zone one last time to force overtime at the end. Now that would have been a fitting conclusion. Instead, the River Rats finished it off in regulation with a 28-21 win.

“I think this win solidifies that we are a for-real football team,” said Mack after the game. “We’re trying to build something here that’s serious, and I’m glad to see the community come out and support. I love this atmosphere and big-time games like this.” 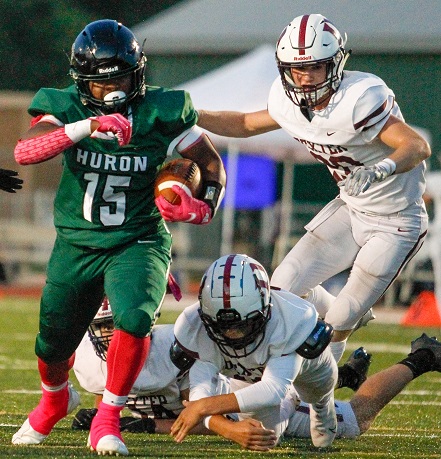 Both teams will be playing in more big-time games like this over the final few weeks of the season. In fact, the Dreadnaughts have some work to do in order to lock down their fourth straight trip to the playoffs.

Six wins guarantees a playoff spot so a win over Monroe would give Dexter five. They then face two very tough opponents to finish the season in Saline (6-0) and Chelsea (6-0) so they would need to win one to get to six. Teams can qualify for the playoffs with five wins and Dexter’s tough schedule could play in their favor on selection day if it comes to that.

The River Rats are one win away from locking up a postseason spot and play Skyline (1-5) on Friday night. The Eagles’ only win was against Pioneer but they did put up 46 points in Friday’s 54-46 loss to Lincoln. Both teams will be ready for a rivalry game.