Everyone sitting in the stands, standing along the fence, watching from the sidelines and coaching the two teams knew one thing for sure after Dexter went ahead 2-0 in the second quarter of Saturday’s MHSFHA Division 1 state finals – this game was far from over.

Not with Pioneer on the field. Not with Jane Nixon on the sideline. And not with everything that was on the line. A state title is earned and the Dexter Dreadnaughts were going to have to earn their second consecutive title. The Pioneers weren’t going to hand them anything, down 2-0 or down 10-0.

Dexter defeated Pioneer 3-0 in last year’s final on a rainy day in Chelsea. This year, the two teams met under the sun and blue skies at Al Ritt Stadium in Dexter and this time it was much closer – in more ways than one.

“The 3-0 game last year was a lot easier on everyone,” Dexter Coach Keely Tamer said. “This one was much harder.”

Pioneer played a much stronger game in the second half and cranked up the pressure. They netted their first goal of the game on a penalty shot with over 5 minutes still remaining on the clock. And they used those final 5 minutes to create a few excellent opportunities against a very young Dexter defense.

Before the season started, Tamer had to replace the entire defense off last year’s state title team. Rebuilding that unit would be a key to them winning again. And while they had shutouts in their first seven regular-season games, the big test was Saturday with everything on the line.

And the Dexter D bent, but didn’t break and the Dreadnaughts deserved every smile, hug and tear when the final horn signaled their second straight state title was in the books.

“I was so proud of the girls for how much defensive pressure they were under and we were able to hold on against a very good attack,” Tamer said. “We haven’t seen a lot of attacks like that from teams throughout the season so I’m really happy with how they performed especially in the second half.”

Pioneer gave them everything they had and then some and clearly deserved to be on that field playing for another state title.

“We never ever gave up, and we know we left it all out there on the field,” Nixon said after the game.

Nixon, who has coached many state champions and great teams and has built the model for success in field hockey, couldn’t say enough about her Pioneers.

“Our 2020 PFH team exemplified all the things that make a team special – hard work, teamwork, and love of the game. Our senior captains (Isa Keen, Ava Morgeson, and Ella Roberts) led with passion and dedication. This season has been filled with genuine gratitude for the ability to play and be together.”

Dexter has only trailed once this year – in the 3-3 tie with Skyline. And like Tamer says, they haven’t been under a lot of pressure with the game on the line, let alone a state title on the line. And the Dreadnaughts stood tall, starting with the goalie.

“Hannah (Baldwin) really stepped up,” Tamer said. “She’s really young, but saw a lot of game experience this year and she got better with every game. And today she made two game-changing saves. I’m just so proud of her because she really worked hard.

“Rachel Gesell, who is a senior, got moved to the inside and really stepped up and played some great defense, and Ella Howatt, who didn’t play her best in the semifinals, came back and had an exceptional game when it mattered the most. She really came through for us today.”

In many sports, defense wins championships and field hockey is no exception. While the goal scorers often grab the headlines and attention, it was Dexter’s defense and their young goalie that helped put this game in the win column. They were young. They were inexperienced. But in the end – they were the difference.

It certainly has been a challenging year for all athletic teams. To play an entire season, be safe, follow guidelines and have a fantastic state tournament with a dramatic state finals is a tribute to the players and coaches. 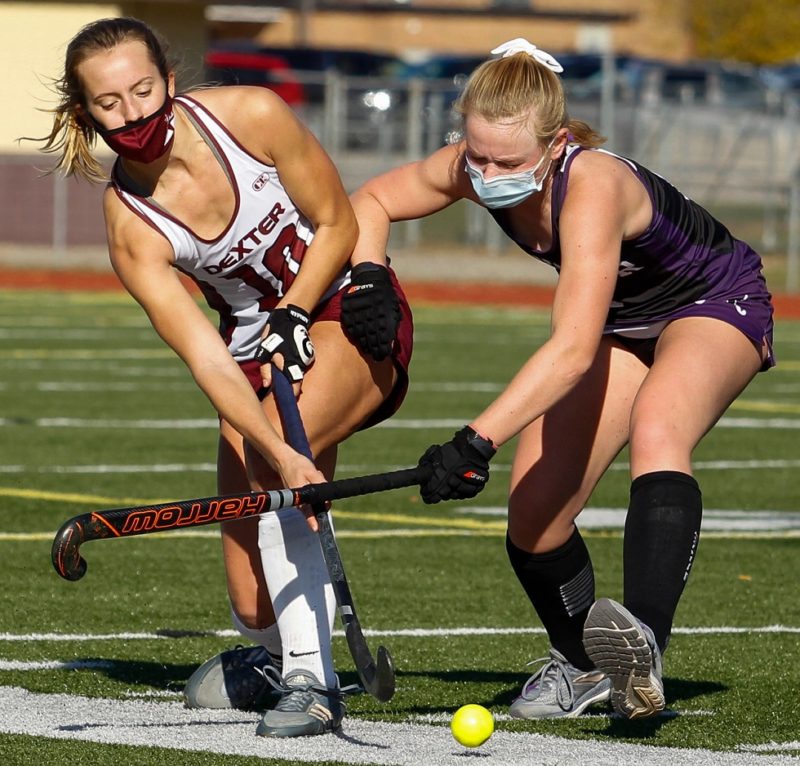 No one summed that up better than Nixon.

“Of course you want to win that final game, but in the end, this journey has empowered us with hope, learning how to never give up, and knowing that you have teammates who believe in you,” Nixon said so perfectly. “These are teammates not just for a season, but for a lifetime.

“Every day PFH 2020 believed in each other and brought out the best in each other. Our team came up with the motto: ‘Together, Grit, Resilience,’ and that’s what got us into that championship game.”

Those same elements helped bring the Dreadnaughts to Saturday as well. And it made for a fitting end to a wonderful season.