CHELSEA – Chelsea State Bank has the distinct pleasure to announce Chairman and CEO John Mann has received The Best of Community Banking Award for 2020 by the Community Bankers of Michigan (CBM). Mann was honored with this prestigious award at CBM Annual Convention held at the Grand Traverse Resort in Traverse City this September with his family present. 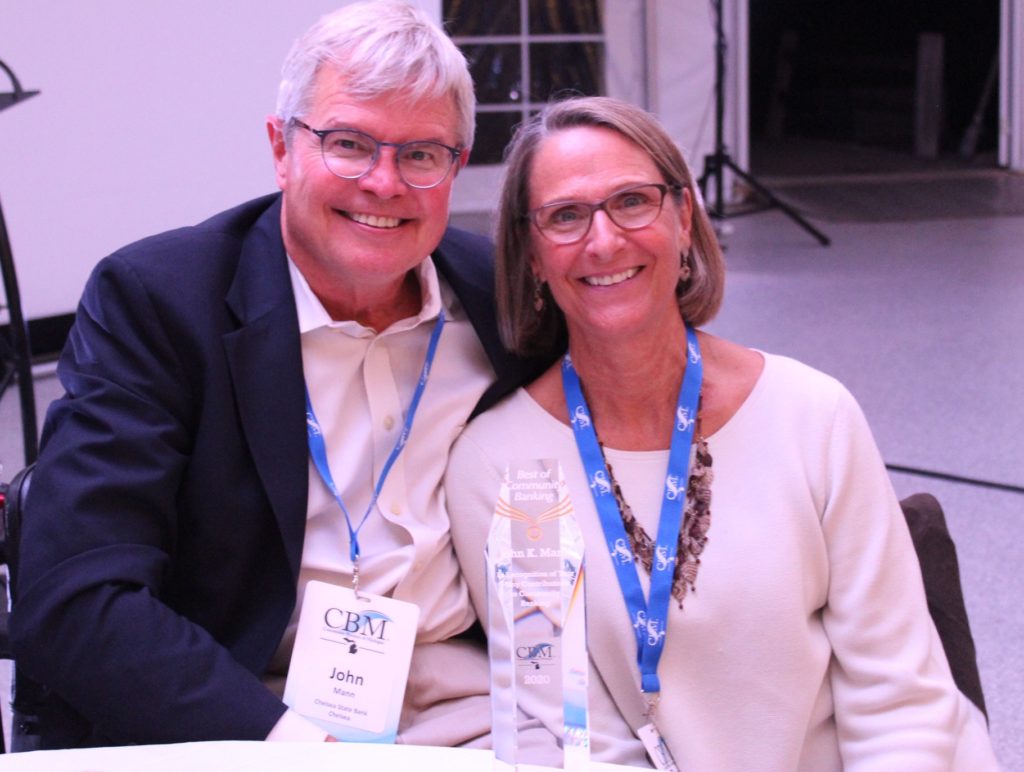 “Receiving this award is truly an honor,” said Chelsea State Bank Chairman and CEO John Mann.  “Leadership in my community is something I grew up with beginning with parents, teachers, coaches and classmates. And community banking has been in my family now for decades. Needless to say – I learned a lot along the way. I am grateful for all the employees, directors, and customers of Chelsea State Bank for making my work so gratifying over the past 32 years.”

Mann began his banking career with National Bank of Detroit in 1983.  He joined Chelsea State Bank in 1988, became President and CEO of the Bank in 1994, elected to the Board of Directors in 1990, and was appointed Chairman of the Board in 2005. Under his leadership the bank has seen assets grow to $364 million from $93.5 million, and capital grow to $40.7 million from $11.2 million.

“It is with great pleasure that we honor John Mann with The Best of Community Banking Award this year,” said CBM President and CEO Michael Tierney. “John exemplifies everything this award is intended to recognize; highlighting an excellent community banker focused on his involvement and success in and outside the bank ensuring the communities served are truly enriched by the actions of the bank and his leadership.”

As a community banker, Mann’s dedication to the Chelsea community is deeply rooted and has been an integral part of the growth of the community and Chelsea State Bank. A lifelong resident of Chelsea, Mann attended Chelsea High School where he played varsity football, basketball and baseball.  He received a Bachelor of Arts degree from Albion College majoring in Biology, and then worked three years for Chrysler Corporation as an emissions engineer. After a summer in Alaska, including a month long 400 mile canoe trip above the Arctic Circle, Mann married Anne Treado. He went on to earn his Master of Business Administration (MBA) at Duke University, Durham, North Carolina. He and Anne raised their three children in Chelsea and now have two grandchildren.

In June, Mann announced he would begin working part time in January 2021. At that time,  Chelsea State Bank President Joanne Rau will become President and CEO, and Mann will remain Chairman of the Board. He plans to spend more time with Anne and their grandchildren.

In 2017, Mann was awarded Chelsea’s Lifetime Achievement Award for his years of service to the citizens of Chelsea and Washtenaw County by the Chelsea Area Chamber of Commerce.

About Community Bankers of Michigan (CBM)

The Community Bankers of Michigan is a trade association serving community banks, and their financial services partners, throughout Michigan. With headquarters in East Lansing, the Community Bankers of Michigan is dedicated exclusively to representing the interests of the community banking industry and its membership through advocacy, education programs and products and services. For more information, visit HERE

Chelsea State Bank is a full-service financial institution with offices in Chelsea and Dexter. The Bank was formed over 100 years ago by local business leaders to provide timely financial solutions to individuals, families and businesses in the community. This tradition of community service continues today.  For more information, please call 734.475.1355 or visit www.chelseastate.bank.  Member FDIC.