ANN ARBOR — The National Kidney Foundation of Michigan (NKFM) has elected a new Chair of the NKFM Board of Directors: David F. Shepherd, President and CEO of Community Care Services at Henry Ford Health System (Henry Ford). Shepherd joined the volunteer Board in 2015. In 2018, he became a finance committee member while also serving as vice chair. He will preside over his first Board meeting in September 2020. He succeeds John Magee, MD, from Michigan Medicine, who served as Chair for the past two years.

“For many years, David Shepherd has been a close friend, generous supporter and a transformational partner to the NKFM. His expertise in the kidney community and his understanding of prevention and health care will be invaluable as we navigate into a future changed by the pandemic,” states NKFM President and CEO, Linda Smith-Wheelock. 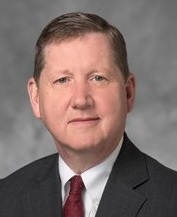 In his current position at Henry Ford since March 2019, Shepherd leads the division that includes home health care programs, hospice care, pharmacy, and retail services. Shepherd had served in this role as interim since June 2018. Prior to becoming the interim CEO, Shepherd was vice president of Henry Ford’s kidney dialysis division, Greenfield Health Systems. Having a solid background in business and partnership development, he established and administered a full scope of operations for more than ten community joint ventures across four states.

Shepherd is an active member in the Renal Physicians Association and National Renal Administrators Association. He is also an accomplished speaker and presenter for national forums on dialysis; has served on both public and private committees; and has held national advisory positions.

About the NKFM
The mission of the National Kidney Foundation of Michigan is to prevent kidney disease and improve the quality of life for those living with it. With more than a million people in Michigan affected by kidney disease, the NKFM works to provide life-changing programs and services across the state. For the past 12 years, Charity Navigator — the nation’s leading nonprofit evaluator — has recognized the NKFM with its highest rating of 4 stars for success in sound fiscal management. nkfm.org