Amanda Crundwell stands where few females ever stand – in the goalie crease of a boys’ high school hockey team. The Dexter senior was asked if the boys on other teams notice that “she” made the save and not “he.”

“Yeah, I do get some second looks from parents, family and other players when I walk in with my team and on the ice,” she says. “Sometimes, the other team players will try and talk to me between whistles. That can be annoying.”

Boys will be boys – even on skates.

Crundwell, who spent years playing youth hockey in Ann Arbor, doesn’t just play goalie for the Dexter boys’ hockey team but she plays it at a high level. She is so good that some of the Dexter players were the ones who asked her to be on the team.

“A couple of the guys reached out to me before this season started and told me they were in need of a goalie and asked if I’d come play for them,” she says. “The guys are very respectful and treat me just as they would any other teammate.” 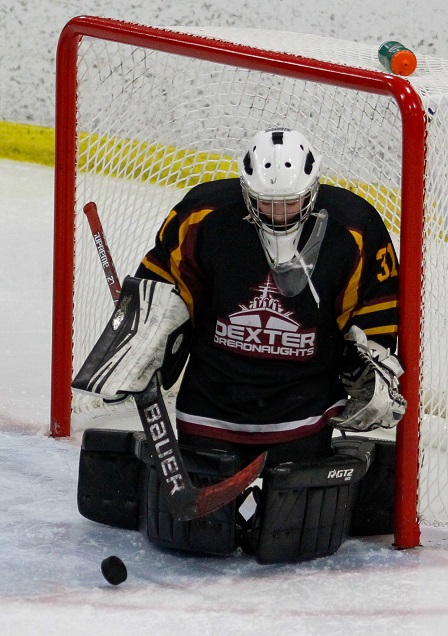 And she is enjoying being a part of this team, even with the challenges.

“With all the delays due to COVID and severe limits on how we can practice, it has been tough,” she says. “But I have known a few of the seniors from hockey for many years. So it is nice to get to play with them for our senior year. The seniors are trying hard to set a good example for the younger players to hopefully build on in the coming seasons.”

There also are unique challenges that only she has to deal with.

“Sometimes it is a problem at some rinks where they force me off to a separate dressing room,” she says. “One rink told me the only place they had was the public bathroom. It can be hard to get into the locker room pregame and be a part of the team.” 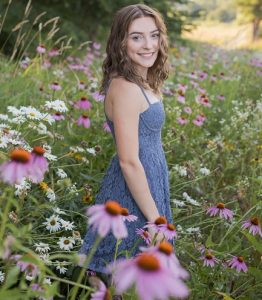 Amanda, 17, is the daughter of Shelly and Randy Crundwell. When she is not tending goal she enjoys snowboarding, riding dirt bikes and playing softball in the Ann Arbor summer league.

But hockey has been her go-to play for a long time.

“I started roller blading shortly after walking, so switching to ice skates was easy,” she says. “My mom has been playing for 25 years, so I wanted to try it myself.  When I was 4 I started playing hockey, but my interest in being a goalie didn’t start until I was 8.

“I played on a girls’ team and our goalie would want to skate out at times so if you wanted to be goalie for a game you could. So, of course, I tried it and after the game in the car I told my dad that I wanted to be a goalie. And I never looked back.”

Crundwell has a competitive fire and is one of those teammates you want to have on the team because she does whatever it takes to win.

“One season I broke a bone in my foot,” she says. “I had my dad take me to watch my team, and the player they had in net trying to be a goalie was struggling. I told my dad to take my crutches. I was going to get on the ice even with a cast on.” 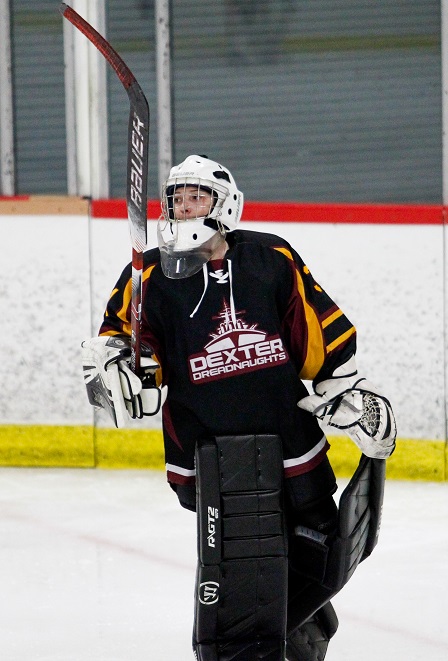 Crundwell has played on many travel teams over the years, both boys and girls clubs. She started at 5 years old with a TimBits Learn to Skate team and then for an Ann Arbor girls team. Then came the switch to goalie.

“Once I put on the pads, I never took them off,” she says. “I played next season with the 8U Ann Arbor Blades, and we went to the State Finals for our division. Looking for some formal goalie coaching and a bigger challenge, my parents found a boys travel team in Chelsea and I played there for two years.  I made some good friends there, some of them are on my current Dexter team.”

She also played on a boys’ team in Novi for another two years and then played on a Little Caesar’s AAA girls’ team.

Crundwell says her strengths as a goalie include tracking the puck along with good side to side speed and movement.

Her self-scouting report: “I am very strong with the down low scrums right in my crease,” she says. “I am also pretty good at stopping breakaways. But my strongest skill is being able to remain calm and focused all the time. It doesn’t matter if I am working on a shutout or have 10 goals against, I play the same way. I see other goalies smashing their sticks against the net when they get scored on. I shake my head and realize that person does not belong between the pipes.”

Crundwell feels right at home between the pipes.

She played with Dexter in their spring session last year but did not continue into last fall with the Dreadnaughts. Her goals for this year’s team include doing the best they can and beating Chelsea. And have fun. 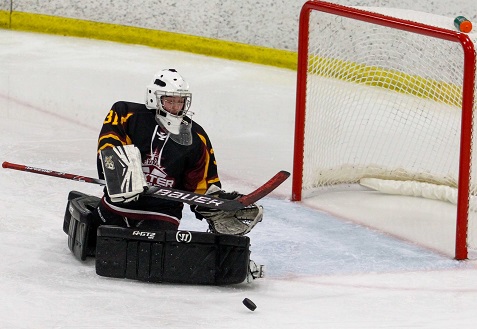 “I have always wanted the chance to represent the school and earn a varsity letter,” she says. “I just love the game and the camaraderie of the team. I feel that we are in a rebuilding year, and I hope to be a positive addition to the team in net.”

As for the future, that question is like an open net.

“I think that it would be fun to play for a good college team,” she says. “I have one school that I am talking to right now to see if there might be a fit, and I am keeping an open mind for what the future might hold for me.”