Liam Meurer’s phone must buzz every 5 minutes with calendar reminders. An eighth-grader at Honey Creek Community School in Ann Arbor, Liam plays soccer for Michigan Thunder, participates in the Honey Creek theatre program and plays the electric bass in the Honey Creek Concert Band. He also plays the violin, runs cross country and is a Washtenaw County Youth Commissioner.

Somehow, someway Liam found time to play the lead part in the upcoming Dexter Community Players’ presentation of “James and the Giant Peach” (Jan. 24-26). He is sharing the lead role with Dexter Krueger as the two young actors will each play James during two of the four shows.

And Liam can’t wait to step on the stage.

“I think that the James’ character is all about transition,” says Liam, who lives in Dexter. “At the start you’re absolutely terrified, overworked, isolated, and beaten. Early on, his character really reflects that. However, as soon as his character develops and he meets his animal friends, he starts to realize all the things that he can do. He really becomes the leader and problem solver of the group.”

Liam is bringing his own take on James. As an actor, he believes that everyone has a bit of a different acting style and take on a character. 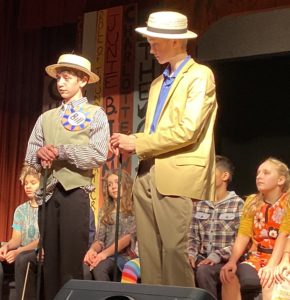 “You are really not going to know what that is until somebody else sees it,” he says. “From all of the shows I’ve done I would say my style is very confident and over the top. To me, doing a play is not about telling the story exactly how it’s meant to be told. It’s about telling a story in a fun and interactive way.

“If the audience is having fun they aren’t going to say, ‘Hey, that’s not a 7-year-old boy, that’s a 13 year old.’ You don’t need to become your character. You need to find yourself in your character and then really play that up. And I think that is where my confident style really shows. James is very confident by nature. My sense of humor and how I am really selling the jokes to the audience sets me apart from the James of the book.”

Liam’s confidence on the stage grows with every role. He also played the role of the mouse in DCP’s production of “Miss Nelson is Missing.” He says he likes the “community” part of Dexter Community Players.

“The experience overall was a good one,” he says. “Community theatre definitely familiarizes yourself with all of the aspects of drama. From set building to acting, I think that there was a professionalism that I hadn’t experienced before. Because it’s community theatre you have to participate in a lot of different roles and really work together to make the show happen.”

One new aspect this time around is sharing the role. He says because of this the director gets to see variations of the role. He also believes that watching the other person perform helped him see himself better in the role.

“You get to implement your own style,” Liam says. “I think Dexter plays the role more traditionally and close to the book, which is great. In contrast, I think that a lot of what I do is a lot more exaggerated from my movements and body language as well as my facial expressions. But I have learned a lot by watching him and it has been a great experience growing into the part together.” 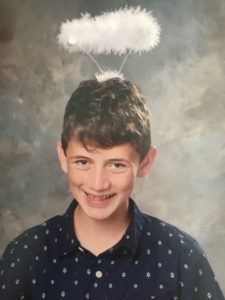 Liam’s favorite part about performing is being able to see tangible reactions from people sitting right in front of you. “You see when they’re having fun and you know when they’re laughing,” he says. “I think that it’s also just fun to maybe not be yourself and try some things that are totally unlike what you would do normally. Performing on an actual set, walking around talking with an audience in front of you is a really cool thing to experience.”

Does he ever get nervous?

“No, not really,” he says. “It’s not even that I turn the nervousness into fuel. It’s just not there. To me, once you have memorized your lines there’s really nothing that isn’t fun about it anymore. I’m more scared when I don’t have my lines memorized and I’m only in front of my director. Acting is fun – not knowing your lines is not.”

Liam says rehearsals for “James and the Giant Peach” are going well. “I see definitive improvement every rehearsal,” he says. “No play is perfect, however the arc of this one has been pretty steady and low pressure. Overall, everyone is impacting the play positively.”

While Liam is one busy eighth grader, he does have another passion he would like to pursue. “I am interested in nonfiction writing,” he says. “I want to learn more about it.”

Now that he has learned his lines, it’s time now to have fun with James.

Dexter Community Players is proud to present their third annual youth production, James and the Giant Peach.  The show will run Jan. 24 – 26, with Friday and Saturday performances at 7 p.m. and afternoon performances Saturday and Sunday at 2 p.m.  She shows will take place at Copeland Theater, 7714 Ann Arbor St. in Dexter. The show is directed by Deric Prieskorn and co-directed by Joy Gee. Tickets are $10 and can be purchased HERE