Dexter and Huron kicked off the 2021 season on Saturday morning with a well-played contest between two programs that should end up winning a lot of soccer games this year.

Talented Huron senior Djimo Kouyate started off the season with two goals in the first half and added a third in the second half to pace the host River Rats to a 4-0 win over the Dreadnaughts. Kouyate scored off a free kick early in the game and then on a header off a beautiful cross by Adam Kasham with 19:04 left in the opening half.

The second goal came just after Dexter had missed a penalty kick – their first of two misses in the first half. With just under 5 minutes to play in the half, the Dreads missed their second golden opportunity to get on the board.

Kouyate made it 3-0 when he converted a penalty kick for the River Rats.

Senior Raymond Hashem scored the fourth goal with another assist from Kasham.

Despite the four goal differential this was a pretty even soccer game between two talented teams.

“The score line is very flattering and it doesn’t show the battle this game really was,” says Huron Coach Luis Gomez. “Dexter was fighting until the final whistle. We easily could’ve been tied up 2-2 at half time. The players available did a great job winning the second half.

The River Rats were missing nine returning varsity players due to the Huron band and orchestra groups attending the Interlochen Music Camp. Those players will be arriving back in town tomorrow and will be available for the matches this upcoming week at Saline on Tuesday and home against Pioneer on Thursday. 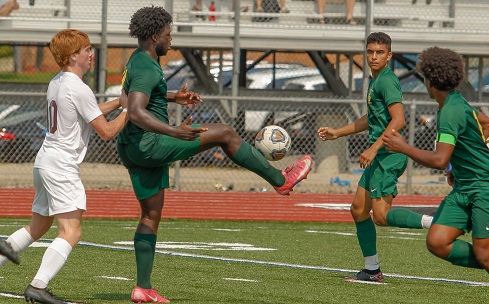 Dexter Coach Drew Ducker saw some good things from his squad in the first game of the year against a quality side.

“Our second half was honestly very good but we couldn’t score,” he said. “Just one of those days. And we’re not fit. Not the start we wanted but lots of things to focus on.”

The Dreadnaughts face another tough SEC challenge on Tuesday against Skyline.

“Skyline will be a good test to see if we can bounce back quickly, especially on the finishing side of things,” Ducker said.