Want to know something ironic about “My Favorite Pants” (above) winning first place in the 2021 Washtenaw Community College Student Art Show? It wasn’t even Alexandrea Capatina’s favorite entry. 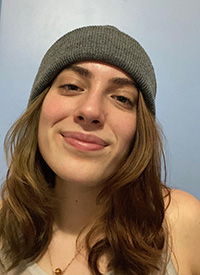 Capatina (right), a 17-year-old Northville resident dual enrolled at WCC and Washtenaw Technical Middle College, accounted for three of the 172 entries from WCC Fine Arts and Digital Media Arts classes in the annual event, each coming from her work in a WCC photography class (PHO 122: Film & Dark Room Photography).

Personally, she preferred both “Mindset” and “Conspiracy” over “My Favorite Pants.” Ebitenyefa Baralaye, this year’s show adjudicator, cited the following reasons for deeming “My Favorite Pants” as best-in-show:

“I really liked the perspective of the photo. I think it’s also very sensitively shot. It kind of puts you in the position of the main subject, staring at their feet and out the window. It’s a piece that I feel like I can look at for a lot of time.”

Capatina is no stranger to photography. Her mother, Tammy Capatina, is a professional portraitist – though Alexandrea admits her only previous exposure to the craft was holding a reflective umbrella on her mom’s shoots.

“I was really just taking that (PHO 122) class for fun,” Capatina said.

She dreams of opening her own shop to create custom, one-of-a-kind vehicles to replace the modern models she thinks “are getting uglier and uglier.” To raise capital for such an enterprise, she’d first like to open a pottery studio.

While the first-place prize went to one of the youngest artists in the exhibit, second and third place were both awarded to WCC students over the age of 65.

Tim Tobias, 68, won second place for his graphite-on-toned-paper drawing, “Blue Jeans” (right). It was created for an ART 111: Basic Drawing I assignment to depict the wrinkles and folds of fabric.

Tobias dabbled with art classes while earning an engineering degree from Lawrence Tech University. “We took art classes to be able to illustrate our ideas and I really enjoyed those,” he said. “I thought throughout my whole career that I’d like to come back and explore them deeper once I retired.”

The ART 111 class was his first after retirement. He never imagined it would culminate in winning an award and drawing this praise from Baralaye, the exhibit judge:

“It’s very well illustratively, as well as representationally, rendered. I like the way it’s also composed, a rumpled set of jeans thrown over a chair. It’s interesting that blue refers not only to the subtle tone that’s in the jeans, but the tone also diffuses into the background of the composition, as well.”

Tobias’ response to those comments: “Nobody’s more surprised than I was, believe me. I’m very happy, it’s really an honor and I’m kind of blown away that someone of his caliber thought so much of that drawing.”

Baralaye is a ceramicist, sculptor and designer currently serving as an assistant professor and section head of ceramics at the College for Creative Studies in Detroit. He was an Emerging Artists Program recipient at the Museum of the African Diaspora in 2017 and an AICAD Teaching Fellow at the San Francisco Art Institute from 2016 to 2018.

Tobias, an Ann Arbor resident, attends WCC for free, thanks to the college’s Emeritus Scholarship, which pays full tuition for Washtenaw County residents over the age of 65. His wife and two children previously earned degrees from WCC.

Third-place winner Amparo Ortiz recently became eligible for the Emeritus Scholarship, reaching age 65 just months after graduating from WCC with a Fine Arts associate degree. She plans to capitalize by continuing to take art classes at the college.

Her mixed media piece, titled “Accordion Metamorphosis” (above), was created in ART 112: Basic Design I. Baralaye had the following comments about the work:

“It’s interesting that this is both a 2D composition as well as a 3D composition in its accordion nature. I really enjoy seeing how the specific forms in the composition transition from being more geometric to the left to more organic, with flashes of color, to the right. It’s a really fun and interesting piece.”

Before enrolling at WCC, Ortiz had never taken an art class, but always impressed her family when she would draw with her grandchildren. A son-in-law encouraged her to get some formal training, so she took a class or two each semester for multiple years.

Her ART 112: Basic Design I class was interrupted by the pandemic just as they were starting on the assignment that would result in “Metamorphosis.”

“It was really hard because we were on Zoom and sending pictures and exchanging emails instead of working as a group,” said Ortiz, who praised instructor Jill Jepsen for doing her best to maintain a sense of collaboration between the students although the class was physically separated.

She said she was particularly thrilled to have the piece recognized considering those challenges. 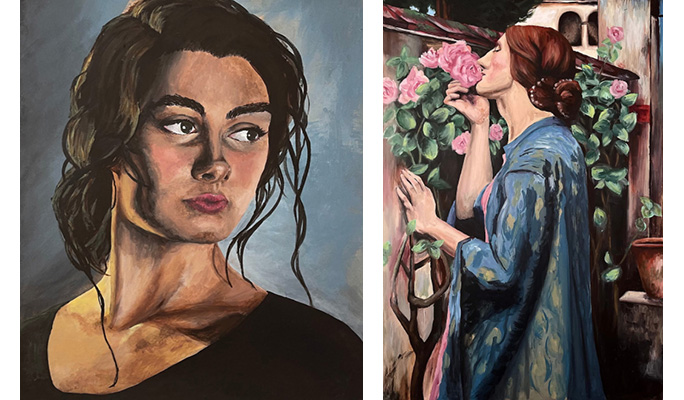 Both President Dr. Rose B. Bellanca and Dean of Humanities, Social and Behavioral Sciences Scott Britten chose paintings by WCC student Sydney O’Connor as their favorite pieces in the art show.

Bellanca chose O’Connor’s “Self Portrait” (above left), an acrylic on chipboard created in ART 114: Painting I, as the President’s Choice Award winner.

“Capturing the human form is extremely challenging,” Bellanca said. “Although I have not had the opportunity to meet Sydney in person, I feel like I know a bit her from her realistic self portrait.”

Britten called “Roses” (above right), the Dean’s Choice Award winner, “a beautiful work.” It is an acrylic on canvas created in ART 125: Painting II.

Baralaye’s final selection was the “Promising Artist” award, which he granted to Yoo Jin Chang for “Limbo,” a clay and paint piece created for ART 108: Three-Dimensional Design.

The People’s Choice Award, which was granted by popular vote from the public, was awarded to Quareese Calhoun for a chalk, pastels and graphite work, “In Spite,” created for ART 130: Art Appreciation.